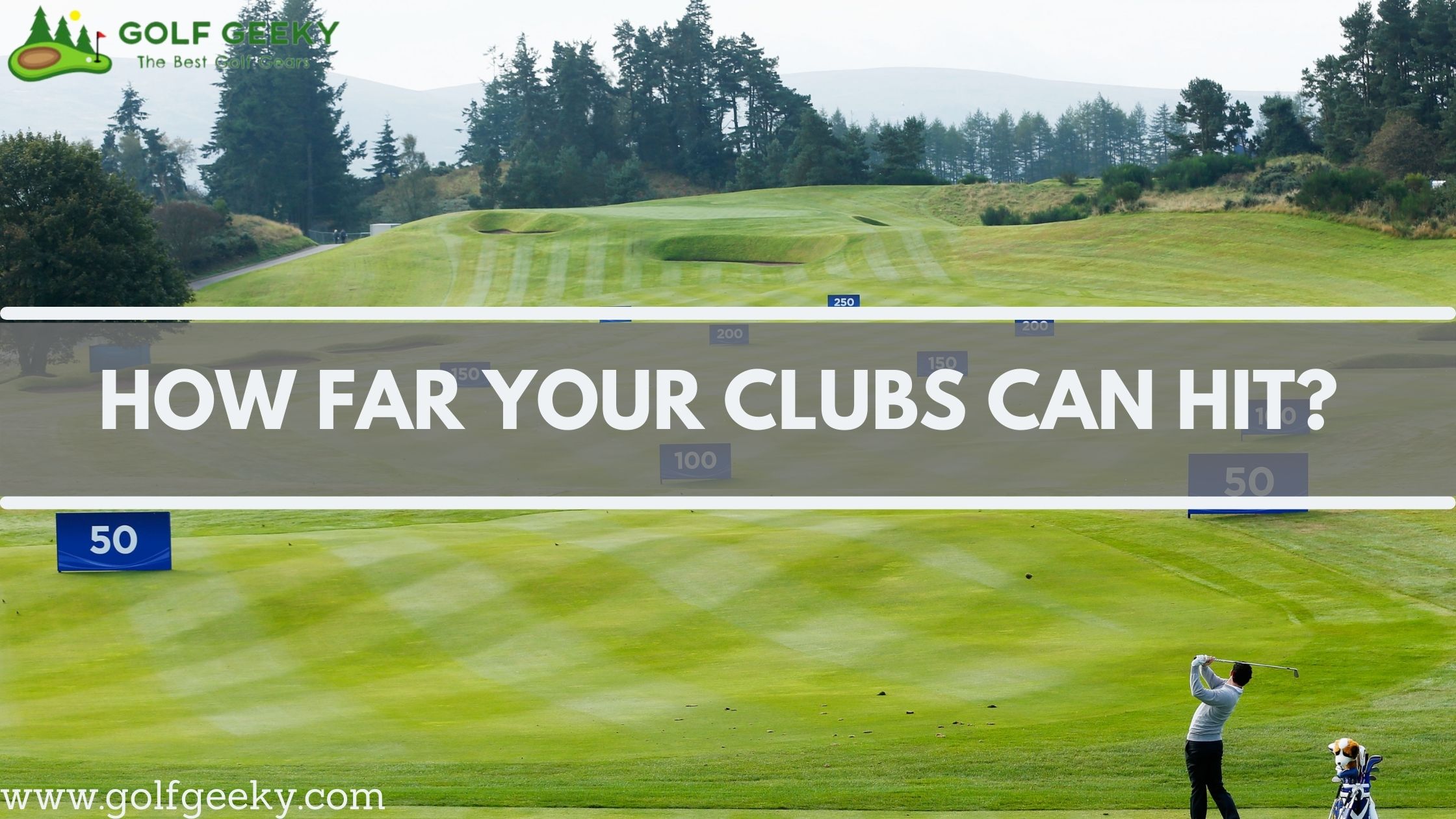 Golf can be a bit of a tactical-based game. A golfer needs to determine and fix at what distance they will be hitting their clubs. In addition, different golfers prefer and play at different distances depending upon their swing speed and ability to play.

Therefore, they must have a basic idea of where the shots can be projected. For example, if a golfer is using his seven-iron up to 120 yards and still has a feeling that it is just not enough, he can exceed the limits.

We have provided a chart to make it easy for you to understand the average golf club distances.

You could get a simple idea about the average distance the golfers can hit the ball through the chart below.

Depending upon the age, swing speed, environment, and more, the numbers can vary.

Still, you can say that it’s better to be known than to be unknown. So a basic understanding of these distances that golfers hit the ball will only be good for you.

The conclusion from the golf club distance chart shows that the difference between clubs should be ten to twelve yards which are kept in your golf bag.

However, if a gap more than the Optimum length is observed in the yardages like about 25-30 yards, the golfer needs to check for his lofts in the clubs. As it can be just because of the loft gap, which can be adjusted.

How To Figure Out Your Distance?

Half of the battle can be easily worn on a golf field if you already know the distances you have to hit your golf shot. Almost every player wants to hit the shot as close as they can to a pin, but they don’t know up to which distance they should hit with their golf clubs.

Several methods are used by different golfers to find accurate distances. But a rangefinder is used in the driving range and is one of the best methods to decide the distance you can hit your golf clubs.

Another method can be to pick a definite target when you enter the range; that way, you won’t end up Hitting your shots in every possible direction. Also, once you have fixed the position, calculate the distance between you and the target, and then, most importantly, select your club by which you can easily hit the target.

If you don’t feel the above methods are useful, you can use a shot tracking app or GPS device to measure the distance. It will give you an additional benefit by developing a guide for you and keeping track of all your average distances.

Talking about the distances is never always the exact distance if a golfer is saying that he hit 150 yards from his 7 iron, the exact value can lie anywhere between 148-153. It’s not going to be 150 always. Also, once you have figured out this 150 number, other shots can be achieved and adjusted off of that number.

It is an understood fact that an 8 iron will travel at least 10 yards less than that of the 7 iron. Similarly, a 6 iron will travel 10 yards more than a 7 iron. After figuring out one club, it becomes really easy to determine all the other golf clubs.

There is more than a single thing involved responsible for affecting the distance in the world of golf.

So, these are some of the components that should be understood by the golfers, who are willing to get more distance.

This is the most important component in determining the distance because it will have a major impact on the distance that a player can hit the ball.

The swing speed is another great factor affecting the distance. How much distance your ball can travel will be decided by how fast you can swing the club. There are exercises specifically for the golfers through which they can increase their swing speeds.

You can also use a lighter club as they will be convenient and easily fasten your swing speed.

That’s the only reason why the iron distance is less than that of the driving distance. And also why it’s harder to hit with a driver than an iron.

This is the most neglected factor about the distance. The ball will travel accordingly as to where it has been hit by the clubs. If it is hit closer to the center of the clubface, it will go further, but if not, the ball’s distance will be inversely correlated. So, it’s highly recommended that the golfer who is having a tough time with the center of the clubface must practice really hard. Otherwise, they will end up losing a lot of distance.

As time has passed, almost everyone has forgotten about them, but still, better performance can be delivered if they are hit in the center of the face.

As for the players who are handicapped in the lower portion, they notice instantly whenever they miss the clubface center even when their clubs are not as promising as the other ones.

As the whole trajectory of the ball changes, it won’t go much high and have sidespin; that’s how they realize that the ball must have lost the distance.

However, if you want to hit the ball in the center, there are no hidden secrets other than practicing it daily, time spent on the range, and a swing with really great fundamentals.

With better contact of the clubface with the ball, you can increase your average distance significantly.

While purchasing a new club from the market, the improvement in the distance of your bag is the most important thing that needs to be considered.

For example, if a 200-yard club from a fairway is your choice, you need to be affirmative about which club it could be. It can vary from person to person as some prefer a 3 wood for this while others can go for the 5 wood for the same purpose.

We have put together a list of all the tips that can be helpful for you about the golf club distances and can make your selection a bit earlier.

The longest club in your golf bag for the distance is a driver. According to their lengths, a driver is the last great, and the loft is the shortest compared to other clubs.

Many players find it tricky to hit a driver straight because of the lower loft and its extended length.

A normal range of lofts of the driver is between 9-12 degrees. Players exerting a faster swing speed are capable of performing better with the lower lofted driver. While the players with slow swing speed go for the higher lofts.

If you possess a great fairway wood with the desired loft, you might be able to hit the ball just as how you want to with a driver. There is only a few degrees difference between the 3 wood’s loft and the driver.

A 3 wood’s average is about 15 degrees. So, golfer’s who want a 3 wood that can go a bit further should seek something around 13-14 degrees. But, if you want a more promising one, then go for 16 degrees.

If you are looking for woods,  go through our guide on affordable woods in the market.

It can be quite tricky when it comes to distances in the case of hybrids. Hybrids are usually made to replace a 2 iron, 3 iron, 4 iron, or 5 iron.

Because of being a hybrid, they are much easier and lighter to hit a shot when compared to iron, so they can be traveled a bit further. Sometimes people observe that the distance of hit of a 4 iron and 5 hybrid is the same. It’s highly expected, and that’s why it must be kept in mind while putting a set together. Also, carrying a 5 hybrid and 5 iron at the same time is acceptable.

Every golfer has their own choice of clubs with which they usually play. However, most of them prefer the set of irons ranging from 4 iron to a pitching wedge or gap wedge.

Hybrids are becoming famous these days and gaining immense popularity. The golfers have discovered that hybrids are more reliable than the 4 iron so, many golfers carry this 5 iron which is also the longest iron in the bag. In simpler terms, the club which is used for sites at a larger distance is the iron.

You can attach a pin if your hit is from the midway of an 8 iron while using it. For best shots or for becoming a perfect golfer, one needs to determine the distances accurately.

Also, with the inaccurate distances, you won’t be able to get even close. Therefore, while learning about the golf club distances, you should pay more attention to the shorter irons and learn about the yardages first.

There can be different styles of wedges; they can be both blade and cavity back. They both have their benefits and drawbacks as well. Some golfers experience that

blade wedges do not go as far as the cavity back; they give out a better feel and accuracy.

Large discrepancies could be found in distances if a golfer didn’t hit the wedge exactly at the center of the clubface or out of a difficult lie.

Sand wedge or lob wedge can be used for shorter distances around the green by many players. However, the longer shots are kept aside for the other wedges in the bag.

These are the only clubs independent of the distance calculations. Therefore a golfer doesn’t need to be worried about them. They are designed in a way to sustain a long putt across a green.

For shooting a lower score, knowledge of golf club distances is the simplest way.

Setting yourself for short putts and easier scoring will become possible for you with the idea of how far a ball can be hit by you.